A downloadable game for Windows and macOS

Loosely based on the Smithsonian American Art Museum's Automobile and American Art collections, New York Minute is a short, lighthearted racing game meant to simulate (and exaggerate) the experience of riding a bicycle in American cities. Urban Renewal meant that many formerly vibrant and walkable communities were demolished in favor of more auto-friendly designs.

The few sound effects in the game were a good indication of when you lose stamina though a couple of more miscellaneous environmental sounds would be appreciated (e.g the sound of traffic and the turn of the bicycle)

The bicycle is quite difficult to control. If you hold shift when you run out of stamina, you completely stop which slows you down a lot. Would love it if the bike had more heft to it, being harder to stop and slowing down instead of stopping almost straight away. I also found myself colliding of invisible objects occasionally A,S and D don't actually effect the movement of the bike so I failed on my first attempt because of the controls.

It was great that you included a controls screen at the main menu, but the text was tiny and didn't really give me a good idea of what I was doing. Perhaps a in game tutorial would be better? Including some floating text in the beginning of the race to explain what is what.

I really enjoyed the game and your passion for the topic was very apparent! Great stuff!

Hey thank you so much! I really appreciate the feedback :). This was my first time developing a real game without a tutorial so I definitely struggled with a lot of the basic principles. I'm glad it was still somewhat playable though! I considered a lot of what you mentioned during development but felt limited by my technical skill. If I were to make a "v2" down the line once I'm a bit more knowledgeable it'll have that level of polish. Seriously thank you though for taking the time to actually play and write your comments, it means a lot!

Game Jams are the absolute best way to become more experienced so you're on the right track. Good luck in your journey! 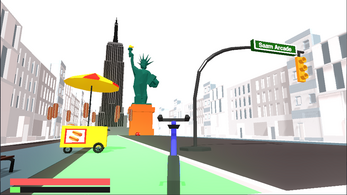